James Jamerson’s basslines were the foundation of the motown sound – full of complex 16th note passages, dissonant passing tones and intense syncopations. Amazingly the majority of them were improvised from chord symbols.

Any bass player wishing to progress on his instrument can learn from Jamerson – indeed the list of bass players who credit Jamerson as a primary influence include John Entwistle, Paul McCartney, John Paul Jones, Pino Palladino and Billy Sheehan.

Take the Cracking The Detroit Code 30 Day Challenge For A Spin For $1! 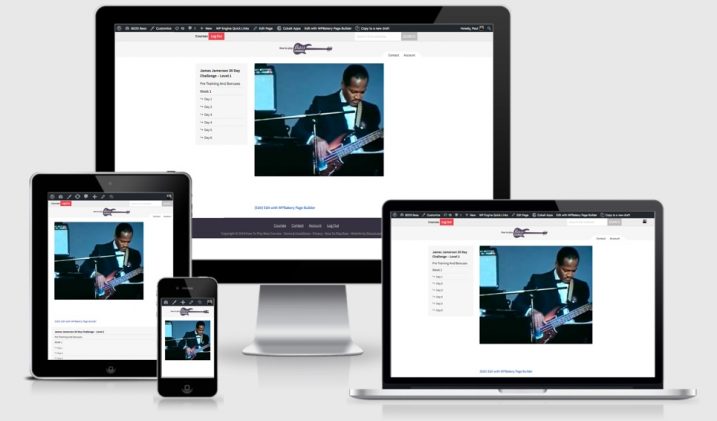 1) I Was Made to Love Her – Stevie Wonder. The bassline on this track is a study in itself. Every measure is unique, there is not a single measure that repeats throughout the tune and yet the groove is utterly compelling from start to finish.

2) Bernadette – The Four Tops. Another mighty groove, check out the version on the Standing In The Shadows of Motown Deluxe CD (see below), it’s remixed and there are sections featuring just Jamerson. Essential listening.

3) Home Cookin’ – Jr Walker & The All Starts. Another amazing line. Jamerson played some great lines on saxman Walker’s records – and Home Cookin’ is just about the best!

4) What’s Going On – Marvin Gaye. From the What’s Going On album, I think the first album where Jamerson actually received a playing credit. Iconic tune, great bassline. Check this out – Jamerson’s bass part isolated! Very cool vid to listen to!

5) Fever in the Funkhouse – James Jamerson. About the only track credited to Jamerson, you’ll have to search around to find it on one of the myriad of Motown compilation albums but it’s worth the trawl. A horn led instrumental track driven by another great Jamerson line.

1) Standing in the Shadows of Motown Deluxe Edition.

This is the CD that accompanied the film/DVD about the Funk Brothers (which is also an absolute necessity). The Deluxe Edition of the CD features a bonus disc – this disc features remixes of the original Motown Masters with most of the vocals stripped away so you can hear what all the instruments were playing! It is eye opening (and ear popping!) – it’s as if you’re in the studio with the Funk Brothers yourself!

IMO the price of the whole deluxe edition is justified by the very last track – ‘You’re My Everything’ by the Temptations. On this remix EVERYTHING has been stripped away, bar the vocals and the bass. It’s absolutely stunning. Truly. Go buy it today.

You can buy this compilation as a box set – or buy the discs individually (which works out slightly cheaper). Either way it’s pretty inexpensive and you’ll have a bass playing masterclass in your hands – all the great motown hits ranging from Stevie Wonder and the Tempations to the Four Tops and the Supremes. Jamerson plays on nearly every track (there’s 96 songs over 6 CDs).

This iconic album was remastered and rereleased as a Deluxe edition recently, it’s worth its place in your question because as well as one of the great Motown albums you also get Marvin Gaye recorded live at the Kennedy Centre in 1972 with Jamerson in his band. As far as I know this is one of the few live recordings available to feature Jamerson, if anyone knows different please let me know via the contact form.

This might be hard to find – but track it down if you can. Earl Van Dyke was the unofficial leader of the Funk Brothers and this 1970 album is an instrumental workout and features Jamerson on some material you won’t find anywhere else – eg covers of Cissy Strut by The Meters and Sly Stone’s Thank You Fallettinme Be Miceelf again.I particularly like Jamerson’s work on My Cherie Amour and The Flick.

This one’s for completists only…another 6 disc compilation, this one pricy. If you can afford this it is a great way to check out some of Jamerson’s motown work with lesser known singers (eg Chris Clark, Jimmy Ruffin, Rita Wright, Edwin Starr etc etc). The smash hits are well documented, but there’s some interesting basslines going in amongst the songs that didn’t chart so highly on their original release.

There’s basically 3 books you can buy that feature Jamerson transcriptions.

The first – and a must have for any bass player – is Standing in The Shadows of Motown by Allan Slutsky (aka Dr Licks). As well as featuring a ton of partial and full transcriptions of some of Jamerson’s seminal moments (I was made to love her, Home Cookin, What’s Going on, Reach Out, Bernadette, the list goes on and on) this book is also a poignant biography AND there’s a 2 CD collection that comes with it featuring backing tracks and Jamerson’s lines played by guys such as Geddy Lee, John Entwistle, Rocco, Will Lee, John Patitucci etc etc. I’ll be posting a full review in my Bass Books section soon…

The second book of Transcriptions is called Motown Bass Classics. This one features 21 motown tunes with Jamerson’s lines transcribed AND tabbed for those of you who can’t read music (if not, why not?). If you’ve got Standing in the Shadows above this book doesn’t cut much new ground, there’s a few tunes in it not covered by the Allan Slutsky book. If you can’t read music but can get through tab, this might be a good place to start….

The third book of Jamerson Transcriptions is called Motown Bass(Bass Signature Licks) by Dave Rubin. I’ve got this book somewhere (been meaning to sell it though), it’s kind of OK but if you’ve got the Slutsky book there’s nothing new here (except tab).

There’s also a few Jamerson lines in the R’n’B bass bible – although there’s also some Duck Dunn, James Brown and assorted others! – but again if you’ve got Standing in the Shadows you’ve probably got most of the tunes already!