If you’ve not read the first article in this mini series – which is called WHY I PULLED MY FIRST BOOK…BASS HANON…then you should check that out here:

Why I Pulled My First Ever Book….Bass Hanon

In that post I said that the Hanon exercises were primarily designed to give an equal work out to all five of the pianist’s fingers (on both hands) and weren’t particularly musical. Here’s the first part of Hanon 1 in C so we can examine that:

Note: the real piano versions of the Hanons are played over two octaves…when I adapted them for bass I truncated them down so they would better fit the fretboard.

There are no chords given with the Hanon exercises because they were purely intended as exercises to drill all 5 fingers. The obvious harmony to apply would be to add the chords of the major scale modes to each bar. I’ve also analysed the exercises in relationship to the overriding harmony in each bar:

Now I mentioned that these exercises aren’t particularly musical – and remember they are designed as digital exercises to work all 5 fingers of the pianist’s hands equally! – but that lack of  musicality especially relates to the language of the bass.

If you’ve been following me for a while, you’ll know that over the last 12 years I’ve been transcribing, analyzing and codifying basslines. (I wish I had an accurate number for how many I’ve analyzed and checked out….but it’s around 1500 songs).

So I can tell you authoritively that while the R-3-4-5 is a reasonably common musical device, I’ve never – not once! – seen it used to set up the ‘6’ on the back end of the bar (that’s beat 3).  Additionally I’ve never seen a device of 6-5-4-3 used in a bass line. So from a bass line perspective, if you practiced this exercise 50% of it is material that you would never play in a bass line.  So 50% of your practice is essentially worthless.

So I abandoned the Hanons and pulled them as noted in the previous episode of this sequence.

And I started looking for musical exercises that were related to bass lines but could be used (if needed!) for fretboard familiarity and technique practice as well. The key points that each of these exercises had to meet were the following:

If you have  a library of these exercises plus a library of chord progressions that you can use as harmonic frameworks…you can align your practice goals with practice exercises where just about every bar contributes to your development as a bass player in terms of technique, fretboard knowledge, bass line knowledge, subliminal ear training and so on.

To give you an idea of the kind of exercise I’m talking about, I filmed the following exercise (at tempos of 200 BPM and 180 BPM): 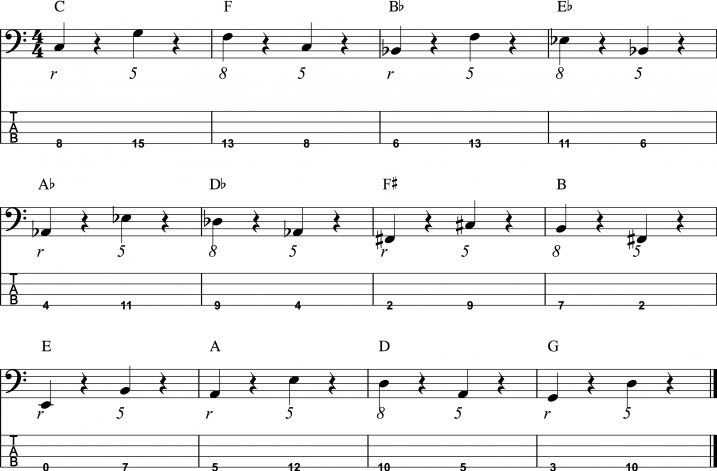 Here’s how this exercise meets the criteria discussed above:

Although this is a reasonably simple sounding exercise….see how well YOU know your fretboard and see if you can play through it at 200 BPM!

Quick Ways You Could Extend This Simple Exercise

The goal of all exercises is to make you a better bass player…here are some ways I though of that you can use to extend this basic exercise so that you can get as much practice juice out of it as possible:

In the next lesson in this series I’ll talk about how the bonus book I gave away with my original Bass Hanon Book. That bonus book was Bass Hanon Variations….and there are some important lessons contained in there that can be combined with these exercises to further expand them and specifically to pick variations that help YOU with the areas you need to work on! More importantly is how this ties in with a simple concept called PRACTICE HOW YOU’RE GOING TO PLAY.