Band In A Box For Bass Players

Take The Overwhelm From Making Band In A Box Your Dedicated Practice Partner! 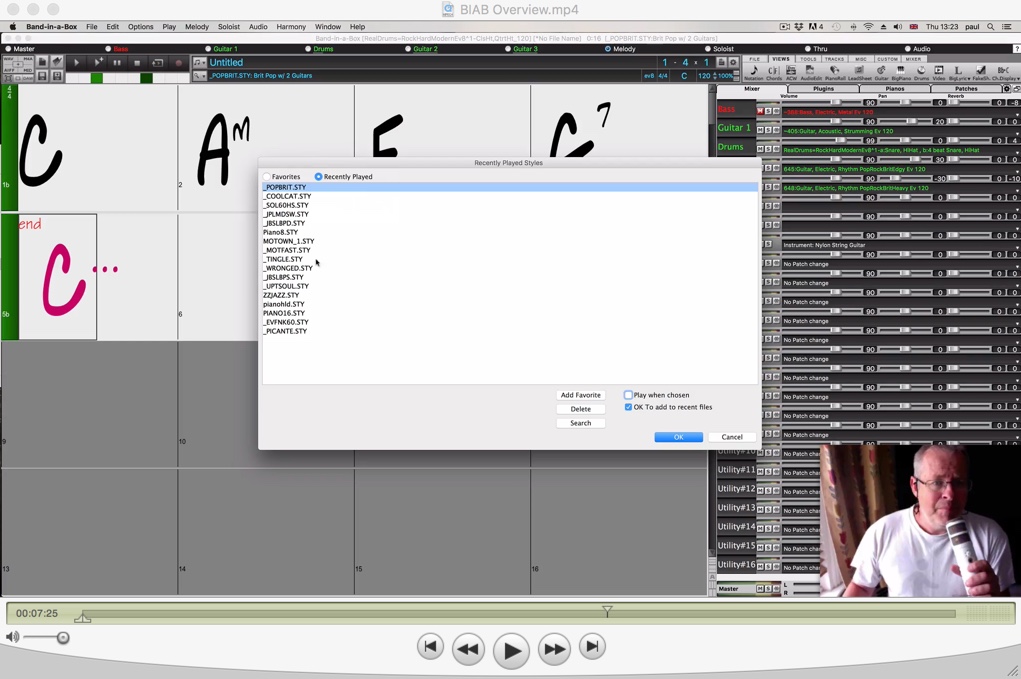 Get The Most Out Of The 'Flight Simulator' For Bass!

Before I get started a caveat: Band In A Box is a program sold by a company called PG Music. I have no affiliation with them...if you purchase a copy I get the same amount of renumeration from PG Music as if you don't purchase a copy.

So when I tell you that I believe Band In A Box is the best practice tool a bass player can have in his practice space (short of having an actual bass of some sort), you can be 100% confident that my recommendation is not based on any kind of sponsorship from PG Music and is my honest assessment.

Just in case you missed the '12 Minute' Quick Overview I did....that's here:

I've been using Band In A Box in its various iterations for 30 years now...so I'm very comfortable with the program.

But I've heard from numerous students who have the program that they've found it complex to use and never really got results from it.

Here's The Reason Why....And What We're Going To Do About It

Band In A Box was originally designed as a tool to create practice tracks for jazz players to jam along with. That original design is still built into the program in various pieces of jazz terminology like 'choruses' for repeats, and the default screen loading with a 32 bar blank chord progression. (Most jazz standards are 32 bars long).

Over the years it's been enhanced and expanded. The biggest enhancement was around 2007 with the introduction of real tracks. Real tracks are 'loops' of information played by real musicians, and the program manipulates these loops to generate its tracks.

It's the closest thing I've ever come across to playing with other musicians...in the privacy of my own practice space.

Here's what one of my students, Henry M, who is a software engineer by profession had to say about Band In A Box:

"I agree that BIAB is straightforward to get up and using, and like any software tool that has 1000’s of features it can overwhelm a person if they don’t constrain their usage.

I happen to be a SW engineer, and when developing we make sure the 20% feature list is as solid and bug free as possible or we will lose customers."

So the first task to reduce the possible overwhelm people find with Band In A Box so that we can use it as a practice tool is to identify the 20% of the features that provide 80% of the results.

In most programs that's done by turning to the 'Quick Start Guide' section of the User's Manual.

Unfortunately that doesn't work so well when the program is written for musicians in general. And not bass players in particular.

Introducing Band In A Box For Bass Players

Over the upcoming months I'm going to be releasing a series of "Style Files" that take the majority of the hard work out of taking ideas from players like McCartney, Duck Dunn, Flea, Geddy Lee (and others) and using them in your own playing.

The Duck Dunn Style File is the second of these releases and covers Duck's R&B playing with Stax  plus also there's a deeper dive into his blues playing as demonstrated in his Masterpiece bass line for Sweet Home Chicago with The Blues Brothers.

The important thing to note though: the ideas covered can be used in multiple genres. The primary difference between genres is mainly rhythmic.

Why Should I Listen To You?

Since July 2021 I've been turning my years of teaching into books.  So far I've written 13 (plus am working on two more to be published in August).

My advice: click this link for LEARNING FROM JAMES JAMERSON VOL 1 and then check out some of the reviews. That will tell you more about my teaching than almost anything, though there are some testimonials below too.

One other fact to consider about this: Amazon's data says that most books get 1 or 2 reviews per 1000 copies purchased. Jamerson Vol 1 currently has 156 reviews on Amazon.com from around 1800 copies sold since its release last August...so the fact that it's getting 50X the number of reviews that Amazon's own data suggests it should be getting, tells its own story.

What You Will Learn

Band In A Box For Bass Players is split into three levels that equate to beginner, intermediate and advanced. (Note those levels refer to YOUR ability with Band in A Box, not your ability as a bass player!). Here's some of what you're going to learn:

What Other People Say?

Here's What Bass Players Just Like You Say About My Teaching - here's Rodi: 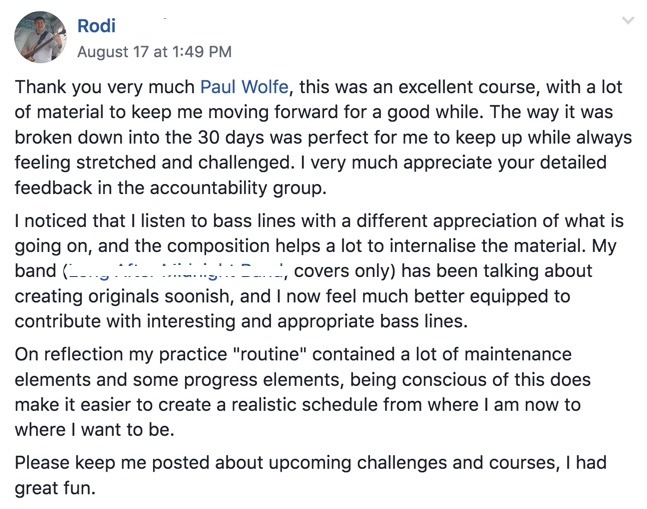 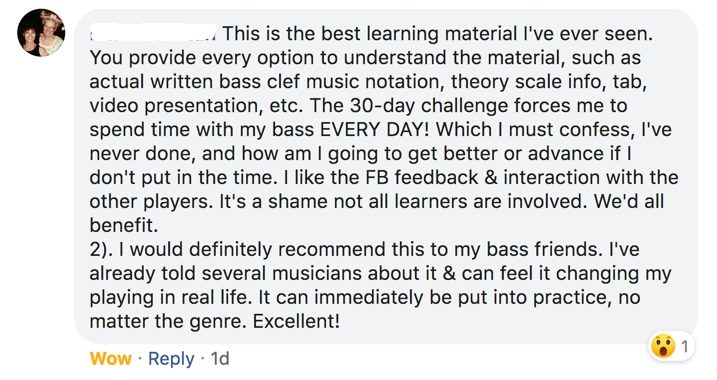 And Rob (and Goran): 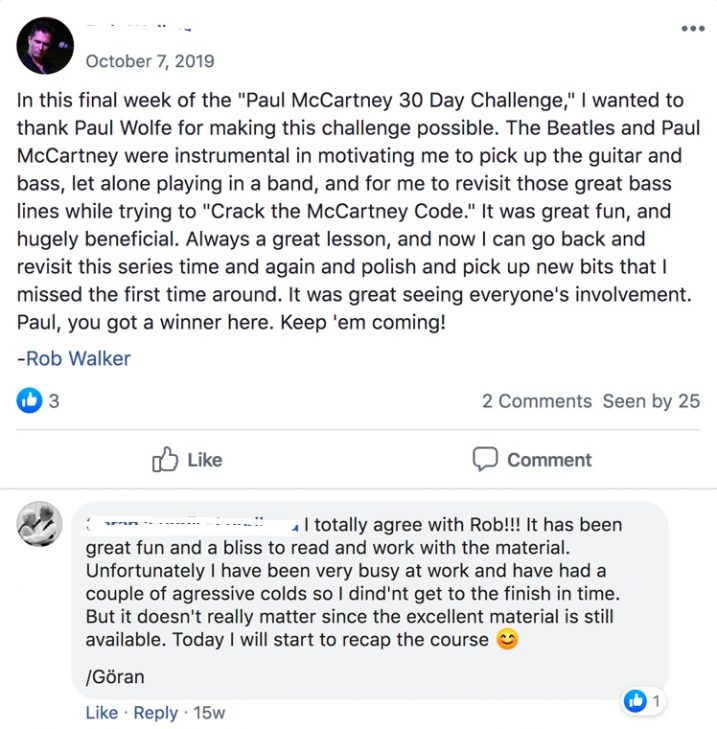 Here's How The Program Will Be Delivered...and Details of Bonuses

The Million Dollar Question - How Much Is Enrollment?

Band In A Box for Bass Players is the result of years of experience with the program. But also visualizing practice exercises and wondering how I could use Band In A Box to do that.

For example, the topics of creating harmonic metronomes and creating practice loops where beats are dropped out form the basis of the exercises in my book TIME AND GROOVE FOR BASS GUITAR. Both of these things are reasonably simple to set up in Band in A Box if...and it's a big if!...if you know how to do it. In BIAB For Bass Players I'll show you exactly how you manipulate the program to do these and dozens of other tweaks to make Band In A Box the best practice partner you've ever had!

Being able to do this yourself is simple: watch the screencapture video, check accompanying text and screenshots (where applicable), open Band In A Box and implement. Instead of each of these practice boosting activities taking hours and hours to figure out...we're talking minutes.

So not only are you turning Band In A Box into a dynamic practice partner. But you're also shaving hours off learning how to do it. (For many of the tasks, there will be Band IN A Box files that you can download where the task is done....and you can load it into your copy of Band In a Box, press play, and hear exactly how it should sound!)

That's a dynamite combination: saving hours of time learning how to program something (which can be reinvested in actual practice), and improving the quality of your practice.

To obtain that double dynamite combination, your investment today is...

Note: all prices in USD . Also note this is a beta price as the majority of the content will start appearing in the members area from Monday 1st august. In three weeks time when the majority of the Level 1 and Level 2 content is completed, the price will go up and the beta only bonuses will be withdrawn. 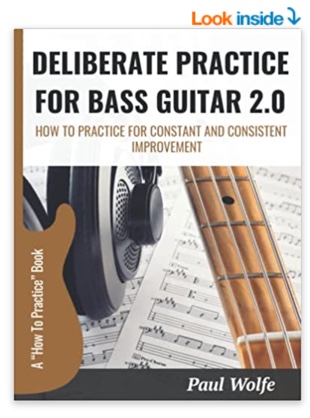 When you've enrolled, I'll email you to see if you want a signed copy of my book Deliberate Practice shipped to your door. (Normally I charge $50 for signed copies as the British Post Office is a PITA to deal with...but for you guys and girls it will be the normal retail price of $19.99).

There's no obligation...but this offer will go out to you after you've enrolled.

15 Day 100% Money Back Guarantee: This is a unique collection of tutorials - as noted, PG Music sell Band In A Box to musicians and their tutorials are pitched accordingly. There are use of Band In A Box in this program that they don't even know exist! As such I'm 100% confident that not only will you find the information in the course highly valuable, but that the implementation of this material will make a massive difference to your bass playing.

I want YOU to be just as confident with your purchase though, so there's a full 15 day no questions asked guarantee period.

If for whatever reason you're not satisfied,  all you have to do is drop me an email and let me know.  I'll refund your purchase ASAP with no hassles and no hoops to jump through, and we can part as friends.

Once you've enrolled, you'll be added to Band In A Box For Bass Players and sent a welcome email. If you don't receive that email for any reason, then don't panic, simply send me an email and I''ll work out what went wrong in the process and get you added to the site manually. So go ahead. Click the big yellow button below and JOIN NOW.