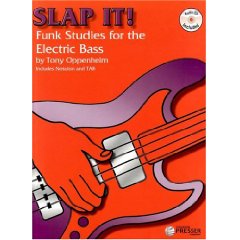 Slap It! by Tony Oppenheim was first published in the early 80s, around 83 or 84 I think. I’ve got one of the first batch of Slap It books that were ever printed in the UK. This was so ‘back in the day’ that the audio examples that Tony Oppenheim recorded didn’t come on CD – this was way before CD. They didn’t even come on tape. No, they came on cheap, plastic 7 inch records! (Which i still have somewhere!). I wonder if they’re worth anything now, as a novelty item…

Anyway when this book came out it was an absolute blessing, because prior to this the only info available on slap bass was provided on a BBC TV programme called ‘Rock School.’ The bass instruction was provided by the self styled Henry ‘King Thumb’ Thomas – and copies of that VHS (and copies of copies) were passed from bass player to bass player.

Then along came Slap It! Not only did Slap It! have some rudimentary sections on techniques (slaps, pops, double pops, hammers, pull offs, trills, slides, double stops) but it had grooves. And loads of them. The first examples were rudimentary grooves, designed to get you used to the different rudiments of slapping (the ‘slap’, the ‘pop’, etc ) but quickly the examples became very funky and very cool.

Here’s a couple of grooves from the book posted on YouTube by a French bassist player – his YouTube name is StellyBass:

Since the early 80s the book has been revised and updated. Now you still get the 150 plus grooves to learn and practice your slapping techniques on, but the book has been fully tabbed out for those of you who don’t read music, and the crappy plastic ‘records’ have given way to a nice, shiny CD!

Now here’s something to learn from my own experience – a mistake NOT to make. DON’T go through the book and just learn the grooves. With each groove take it, get it down, then start transposing into other keys. Use it as the basis of a song. Get something like Band in A Box and generate some ‘songs’ to play along with. Or ask a keyboard player to add some chords to some funky drum loops that you’ve found. That way, you’ll not only get great slap practice, you’ll develop as a player. I’ve heard some great slap playing (in E) in music stores in London on a saturday. But if you ever go over and say: ‘Hey dude, that’s a great line. Would fit a fusion song I’m working on – could you show me the line in Ab minor.’ Most of them will make some excuse why they can’t. And the answer is: they’ve learnt a line, and don’t know how to apply it to anything else.

Now don’t get me wrong – I’m not knocking anyone. I MADE THIS MISTAKE MYSELF – over and over again with stuff. But eventually I learnt it. Re-read that, because I guarantee you it’s worth 10 times the price you paid to read this review (uhhh…..I know 10 x nothing is still nothing, but you should get the point!).

Anyway, if you’re into slapping this should be fourth on your list of items to purchase (assuming you’ve got a bass, and an amp, and a drum machine etc etc).