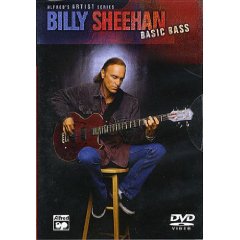 Billy Sheehan is one of the great rock bassists. If you’ve never heard of him here’s a clip I found of him on the ‘Tube. It’s over 8 minutes long but it’s worth a good watch – and listen with the headphones on (unless your computer is hooked up to some rocking speakers!). This clip is from a Mr Big tour from sometime in the 90s – my favourite section starts around 6.10 when the drums come back in and Billy duels with Paul Gilbert guitar(now that dude can play!)

Although Billy Sheehan has got a ton of fancy moves, he’s also a solid grooving player too and knows when to pull the ‘cool looking stuff’ out and when to keep it in his toolbox. He’s also an intelligent guy whose explanations are both precise and concise, and he’s one of bassdoms great original thinkers (there’s a Japanese VHS out there somewhere where he’s interviewed by a guy called Wolf Marshall and he explains hwo the different elements of his technique came together – it’s required viewing if you can find a copy, I don’t know if it ever made it to DVD).

Anyway, let’s look at the DVD. It’s about 90 minutes long and split into the following sections;

Let’s look at each of the chapters in more detail:

Introduction This is a short section where Billy introduces the DVD and lists some of the topics that are to come. He mentions a couple of important things here: that beginners are not well catered for (and that most bass literature – books or DVDs – are aimed at people who are already playing) and that the basic techniques covered will be the foundation of your technique for years to come (which is why it’s important to try and get it right first up!).

Choosing a Bass The second section of the DVD looks at choosing a bass. Billy starts out by looking at the parts of the bass (bridge, neck, pick ups etc etc), he talks about different woods, different manufacturers, active or passive (and their differences) and most importantly he talks about holding the bass, getting comfortable with your chosen bass and the best tip here: that you should play the bass in the same position when you’re sitting down as standing up.

Right Hand Basics This is a real interesting section – one of the best on the DVD – where Billy looks at ‘fingerstyle’ playing. He starts off with 1 finger of his picking hand, then looks at 2 and then looks at his main technique which is playing with 3 fingers. If you’re interested in playing with 3 fingers so that you can get speedier, this section is really interesting. Now Billy also emphasises that there’s a ton of different ways that you can actually play, and one of the points he makes at several times in this DVD is that it’s important to try different techniques out and see what’s comfortable, what works for you both physically and with the sound/style you’re aiming for.

Slap and Pop Billy Sheehan is not renowned for his slapping so it was quite a surprise to see a short section on slapping. This is a very basic section – if you’ve not slapped before it will give you some ideas on how to get started.

Left Hand Basics This is (IMHO) the money part of the DVD. This section splits down Billy’s approach to scales, and playing scales, into the application of three basic patterns: pattern one is half step & whole step, pattern two is whole step & half step and pattern three is whole step & whole step. Using just combinations of those three patterns Billy then proceeds to play G major in every position on the bass, from lowest note to highest. Now this is an application of modal theory – and Billy is a bit disingenious about this, claiming he doesn’t know the names of the modes…coming from someone as thorough as he is my gut reaction is: I don’t think so dude! – but that doesn’t make any difference. This is a really powerful way to break the fingerboard down – you do this for all 12 keys and you’ll know more about the fingerboard than 95% of other beginner bassists! This section is well worth checking out – one of the great things about DVDs is that you can isolate sections and play them over and over so that you absorb them far more fully than you would if you just watched once through.

Breaking Down a Lick into Component Parts This is another real interesting section – if you’ve seen any of my Video Lessons in the ‘Virtual DVD’ series then this section is kinda like the Digital Independence exercise featured with the left hand technique lesson. If you’re working on some specific parts – and finding yourself with some technical problems – Billy shows how you can isolate specific components of the lines you are working on break them down into their constituent moves (eg 1st and 4th finger, 2nd and 4th finger, etc) and then practice them forwards and backwards to give your hands strength, independence etc etc.

Time In this section Billy talks about the concept of time, the importance of tapping your foot while you play and some basic playing with a metronome.

Locking With the Bass Drum This is an extension of the ‘time’ section. Here Billy talks about locking with the bass drum. I’m gonna feature some video lessons on playing with a drummer in my Building Basslines series down the line.

Root-Fifth-Octave This pattern is also something that I’m going to feature in the Building Basslines series. Billy talks about the roof-fifth-octave pattern and applies it in some easy patterns.

Simple Bass Lines In this section Billy puts the techniques together and plays some simple basslines and talks about how the notes fit together (and also how some of the left and right hand techniques sections fit in).

Playing in Different Styles Billy talks about how all these techniques can be applied to different styles, whether it’s country, rock, heavy metal, whatever. He recommends that you check out the bassists in the styles you like and learn what they’re doing.

Using an Amp Here Billy talks about playing with an amp, setting tone controls, what sounds you get with different settings etc.

Changing a String A quick section on changing a string. Might seem really basic – but if you’ve never done it before here’s a quick demo!

Tuning Billy talks about tuning – and I like his cool demo where he turns the bass upside down and flips it around and the tuning changes! He briefly touches on harmonic tuning, and also talks about intonation up and down the neck. If you want to see more info on tuning check out the first lesson of my Virtual DVD.

CONCLUSION: This is a great DVD for people wanting to start out on the bass – or people who’ve been playing for maybe upto a year or so. Whatever style you want to play in you need to have the foundations in place – the right hand, the left hand – and get them set in stone so that you can build on that. There are several ways to achieve this – Billy Sheehan’s are not better or worse than some of the other methods out there – just different. Whether you take Billy’s approach to left and right hand foundations – or someone else’s – the greatest learning you should take from this DVD is the thoroughness of your approach to these foundations. The point of working on these techniques is so that they become natural, leaving you free to express ‘music.’ That’s something that not a lot of guys touch on (Victor Wooten is one of the few who does – and so here in Basic Bass does Billy Sheehan).