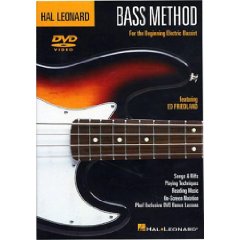 The Hal Leonard Bass Method DVD is a companion to 3 books of the same name (see review here!) and each of those books has a supplemental book of the bass lines to approximately 20 tunes.

.
First off let me get on the record that I like Ed Friedland. For years he wrote a regular column for Bass Player magazine and also some feature articles (amongst others there was a great article on ear training and a really great article on running your own covers band). He?s also written a ton of bass books (either Google him or check out his listings on Amazon).

Back in the day when I was first becoming a professional bass player the only way to survive was to play a string of background music gigs in restaurants (sometimes 5 nights a week, for ?25 to ?30 a gig plus a pizza and a soft drink!), and that meant playing jazz. I purchased Ed?s BUILDING JAZZ BASS LINES and locked myself away with it (and BAND IN A BOX on an old Atarti ST) and played jazz bass lines unde rhis book?s guidance about 8/9 hours a day for a week until I had to play at the first of these background music gigs. Without the book I?d have had no chance and my fledgling professional career might have died a death right there and then (So thanks Ed!).

Anyway, The Hal Leonard Bass Method (hereafter HLBM) is aimed at total beginners to the bass – the reason I?m reviewing it for ya!

The DVD is split into the following sections:

I watched this DVD in a single sitting and found it a frustrating mix of info that is great for beginners and info that is not greatly thought out.

Ed spends some time on the real basics: the names of the parts of your bass, how to tune the bass, some info on amps, how to hold the bass, left and right hand positioning, and a good – if brief – look at both fingerstyle technique and pick technique.

However after all this good stuff Ed then spends the buik of the DVD working on how to read music. Now I?m all for learning to read music- it?s a far superior method of interpretating music than tab – but IMO video is totally the wrong medium to teach reading music and Hal Leonard (who normally release pretty good products) made a mistake here – at the very top of the DVD Ed explains that the DVD is a companion piece to the books, so why couldn?t they have pointed us in the direction of the books?

Then they would have had more time to spend on the SONGS section of the DVD, which comes over as hurried and most beginners would probably have preferred a more detailed look at how to play some songs (rather than Ed playing them with a backing track whilst the music scrolls by) – maybe in the style of some of the Lick Library DVDs?

Just for the record, the songs Ed teaches are:

The original bassist who played on My Girl was the legendary James Jamerson – if you stick around here for any length of time you?re gonna hear lots about him! – and Ed pays homage to him by playing this line with only his index finger (Jamerson only played with one finger, nicknamed the ?Hook). Now I know that – but then I?m a bit of a Jamerson fanatic – but your average beginner wouldn?t know that and would suddenly wonder why Ed is playing with only one finger, not two.

Someone probably thought this was cool – but IMO this just displays some of the muddy thinking that went into using up half the video on learning to read music. Which is a shame, because Ed Friedland is a good teacher and as I stated before has written some really good articles and books.

An informative video for Beginners is something that?s missing from the library of available DVDs for bassists (most available DVDs go down the road of: ?here?s a cool lick i played on that song on my album?) and video is a great medium for getting across info that is otherwise hard to communicate – with a bit more thought this video could have been so much better.