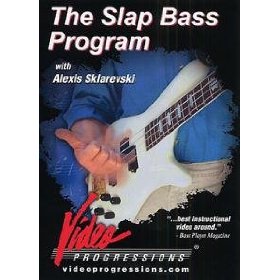 This Video lesson was originally issued in the early 90s on VHS. Thankfully it’s been remastered and put onto DVD.

Now I don’t know a massive amount about Alexis Sklarevski – he wrote for Bass Player Magazine for a while in the 90s, taught at BIT in LA, did some stuff like that.

But this is the third essential teaching aid I recommend for bass players who wanna learn how to slap. (The first two are Ultimate Slap Bass by Stuart Clayton and Funk Bass by Chris Kringel.)

This lesson was made by a company called Video Progressions, who primarily make guitar tutorials. However they have made 3 bass lessons – this one, Rocco’s Fingerstyle Funk (which is fantastic, I must review that soon!) and a tapping video by a guy called DeWayne Pate (awful moustache, interesting video, it’s got Dave Garibaldi from Tower of Power on it too!). All 3 of their bass lessons share good production values, there are lots of shots where you can see the fingerboard and the fretting hand (something I need to learn how to do!), there’s over the top of the fingerboard shots and they have some clever mixes of playing grooves dissolving into those grooves being played in a band context. So the presentation is good.

Well Alexsis Sklarevski looks a bit like a silicon valley geek, but he’s a great bass player. And just as importantly he’s a great teacher (which a lot of great bass players are not!). The DVD lesson covers a lot of ground in the 80 odd minutes that it lasts. It start off reasonably simply – with thumb and then adding pops – but it quickly moves on and looks at many topics familiar to bassists interested in slap: hammer ons, pull offs, trills, blues scales, patterns, vamps, muting, and more advanced stuff too: machine gun triplets, double plucking, double stops, flamenco style strumming, John Entwistle style typewriter tapping, and more.

The only problem with this DVD is that it was originally filmed in the early 90s as I said, and it hasn’t been updated to include any of the advances made by guys like Victor Wooten with the double thumb.

That’s a minor quibble though – this is an essential visual companion to Stuart Clayton’s Ultimate Slap Book.

Here’s some footage I found from the video on the ‘toob (please note I didn’t upload the footage to YouTube!):