Using The ?Slow Down? Features Of The Tascam Bass Trainer (or other software) To Learn A Song

The Tascam Bass Trainer is one of my favourite pieces of hardware.? It?s a practice amp, tuner and metronome built into one – and it fits into your coat pocket.

But the best feature is that it allows you to slow down an MP3 file without appreciably altering the pitch.? (OK, when you go REALLY slow it does alter the pitch fractionally. You can either ignore it – or retune your bass slightly).

If you use a computer as part of your practice there is software available which does a similar job, so you don?t have to have a Tascam to get value from this part of the lesson.

One of the biggest mistakes that I?ve seen beginners make is that they try to learn a song at performance tempo – and they make lots of mistakes.? They keep playing it over and over, hoping that the mistakes will disappear.? Well, they never do.

Instead what you need to do is learn a song out of tempo first – learn the notes of the pattern you?re learning without any kind of beat or tempo present.? Only when you?ve learned the notes can you then take that sequence and start adding some rhythm.
But don?t start immediately trying at performance tempo – instead make use of the Tascam?s slow down feature (or your software) and play it through a number of times slowly.

The Tascam has the following speed settings:

So you can actually play a song faster than the recorded version.? This is a great feature when you?re reviewing tunes – I?ll talk about this in more detail another time.
What I want to do is give a demonstration of this in action – obviously this will work better with a real line, so I?m going to use the following segment from the bass line to Superstition by Stevie Wonder: 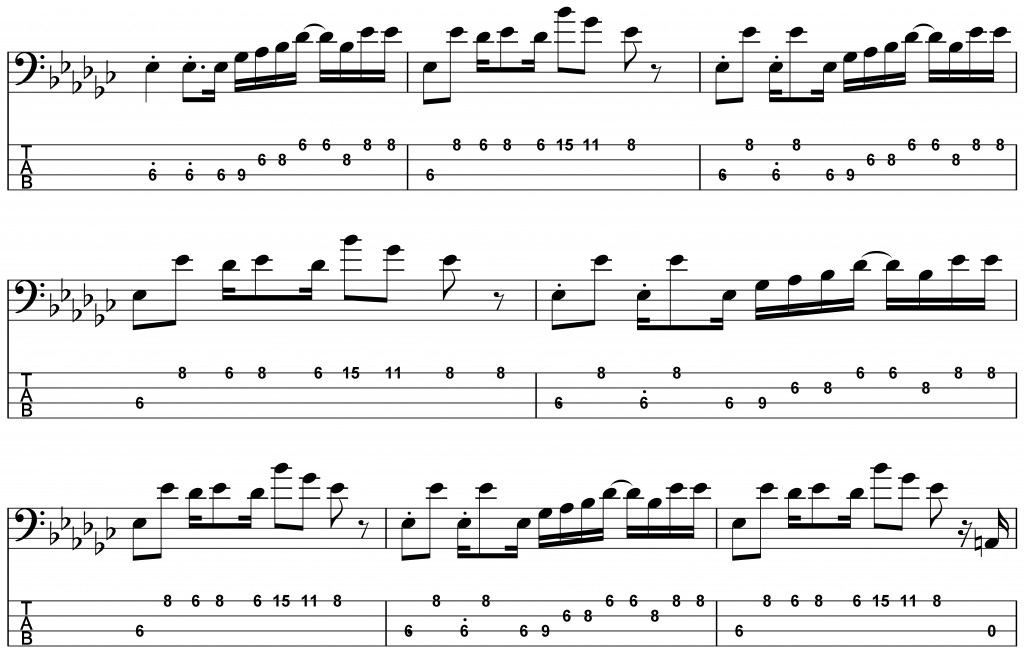 Now I don?t expect you to learn this – but I wanted to put in a relatively complex piece of music into this lesson so you could see it at work.? One of the other great features of the Tascam bass trainer (and I know that most software systems have this too) is that it allows you to ?loop? sections of a tune.? So you can set your loop in point approximately 4 beats before the section starts…and then loop out just after it finishes.? (You?ll hear what I mean on the video)

What I would suggest is a sequence like this:

Some thoughts on this process:

1) It might take you a period of time to work through a particular tempo sequence.? You have to make sure that you are playing at a tempo range perfectly – and can do it multiple times – before you move on.? That?s perfectly OK.
2)? You can use this for simpler songs too.? And sometimes you won?t have to start at -50, you might be able to start at -32.? Or -16.? Each time you learn a piece like this then you?ve improved your ability level a fraction.
3)? Learning a song in chunks using this method will be learning the line at a deep level.? That means that if you learn a line like this, you?ll be able to go 6 months or so without playing the line and then be able to play it from your deep memory.? (This is very cool!)