There are previous articles in this series you should ideally read if you haven?t already:

The Catch 22 For Bass Players When Learning Songs

Second? I talked about the first method you can use of making practice time spent on going over songs you already know work to help you improve as a bass player:

So: How Can You Practice Songs You Already Know Without Your Bass?

The answer is a process called visualization.? Now this sounds a bit? “new age” but there’s a solid, peer reviewed, scientific study of basketball players that is commonly cited when talking about visualization.

Here’s the Cliffs Notes version (if you google Basketball and Dr. Biasiotto from the university of Chicago you’ll find more detailed info):

After thirty days here were the results:

Read those last two bullet point sections again….and then re-read the last line.? Merely by visualizing making free throws for an hour a day a group of basketball players increased their percentage at this drill by 23%.

So How Can We Use Visualization To Practice Songs We Already Know On The Bass?

Visualization is the process of imagining you are doing a particular activity rather than actually doing it.

Or you can cue up the song on your MP3 player of choice and imagine yourself playing the bass line as the song is playing.? (See the section below on making visualizations more effective).

Visualizations Work Best When Going Over Songs You ALREADY Know

Notice in the basketball study I referenced above that the drill being tested was one of the most basic and core basketball drills – the free throw.

The effectiveness of your visualizations improves the more you can involve the senses as well as the imagination.

So the obvious sense to involve is sound…you can listen to the recording as you visualize playing through a song and imagine yourself playing through the line.? If possible hum the bass line whilst doing this.

I also add sight into this as well. If I’m somewhere where I’ve got internet access but no bass I can use visualizations with my interactive soundslices and replace the notation with a representation of the fretboard: 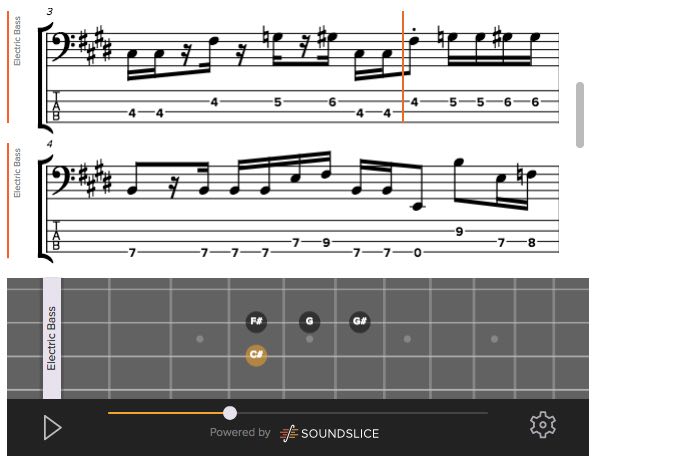 Touch is another sense that you can activate.

I have a practice tool called a Prax Ax – it’s basically a wooden square the size of a big smartphone with a mock bridge and very short bass strings on it – and when I’m using visualization I can actually pluck the strings with my fingers.? (Obviously you’ve got to be somewhere where the noise of this plucking isn’t going to annoy anyone).

Or if I’m in the car I’ll often mimic the rhythm of the bass line with my plucking fingers on the steering wheel.? (Obviously you should only do this if it’s totally safe!)

This goes back to the study of basketball players – visualization is effective but not as effective as actual time with your bass.? So don’t use it as a substitute for practice with your bass – but you CAN use it in situations where you don’t have your bass and it’s highly effective.? It’s definitely a tool you should investigate more and add to your practice toolbox.

Why I Had To Learn To Walk On The Bass….