When bass players are learning new material it?s a common practice technique to play along with a slow drum groove or metronome once that material has been learned, and then to work whatever it is you?re learning up to tempo by gradually increasing the tempo of your drum machine and tempo.

However effective practice is about making your practice time do double duty where possible – and there?s a prime opportunity to use this particular learning method to get in some subliminal ear training.

Firstly, What Is Subliminal Ear Training?

Ear training is the process of learning to recognize various musical sounds.? This can range from recognizing the difference between two notes of different pitches to the difference in qualities between two chords (is it minor? major? dominant? etc) or to hearing chord progressions.

Now most bass players – and indeed a lot of other musicians – do this as a conscious process where they sit down and work on exercises that help train their ear to do this.

But in most bands the guy with the best ears is usually – not always, but usually – the keyboard player.? The reason for this is that keyboard players get a ton of subliminal ear training as they?re practicing their instrument.

Say for example they are practicing some melodies and solos on the blues progression.? And they are playing these melodies with their right hands whilst ?comping? with their left hands.

They don?t even realize they are getting ear training – as their practice is not even focused on it, instead it?s focused on the blues material that they?re learning.? But their ears are hearing those chord qualities, and how the root notes of the chord progressions are moving, and it files away.

The more of this kind of practice that keyboard players do, the better their ears get.? Easy to understand, right?

That?s where a chordal metronome comes in.

So What?s A Chordal Metronome?

A chordal metronome is simply a ?metronome? that has two components:

By using a chordal metronome for the learning technique we talked about above, you?ll ensure that as well as learning the particular line or exercise or groove that you?re working on, you?ll also be playing that practice material both in the correct harmonic context AND you should be exposing your ear to different chord progressions built of different quality chords.

The easiest way to envisage this is to hear/see it in action.? Here?s an example from the Rhiannon tutorial: (if reading in the PDF, click on the image to hear this):

Hopefully you?ll get the picture.? By practicing this simple line with the chordal metronome you get the clicking quarter note to keep time, and you get held piano chords to give you harmony.? Whilst you are learning this line you?ll also be hearing two different types of chord (a minor chord and a major chord) and you?ll be hearing a distinct – and common – chord progression which is the VI minor to the IV major chord progression.

In the key of C, that would be A minor to F major.

Creating A Chordal Metronome – Using Band In A Box

Band In A Box is the quickest way to create and use a chordal metronome – and it?s in my top 5 list of things that every bass player should own and use.

(Sidenote: I have no affiliation to PG Music – the company that make Band In A Box – and I?ll make exactly the same amount of money from every person who reads this or any other BIAB tutorial that I write and decides to purchase the program: a big, fat ZERO.? I write about this tool because it?s what I use to practice with nearly every day.)

How To Program A Chordal Metronome Using Band In A Box

The first step in the process is to actually have a practice piece that you?re working on that you need a chordal metronome for.? So as we used the example of Rhiannon above, let?s go with that.? Here?s the verse format for Rhiannon programmed into Band In A Box:

Now notice a couple of things:

1.? The sequence ends on a held ?C?chord – that?s because the section that follows the verse starts with a C chord. And when you chunk down parts of a song and practice them in those small sections, you should always be building in your connections to the following sections in your practice.

Step 2 of the process is to select the style that serves as the chordal metronome.? To do this, click on the Style Picker button:

And then you?ll see the Style Picker dialogue box: 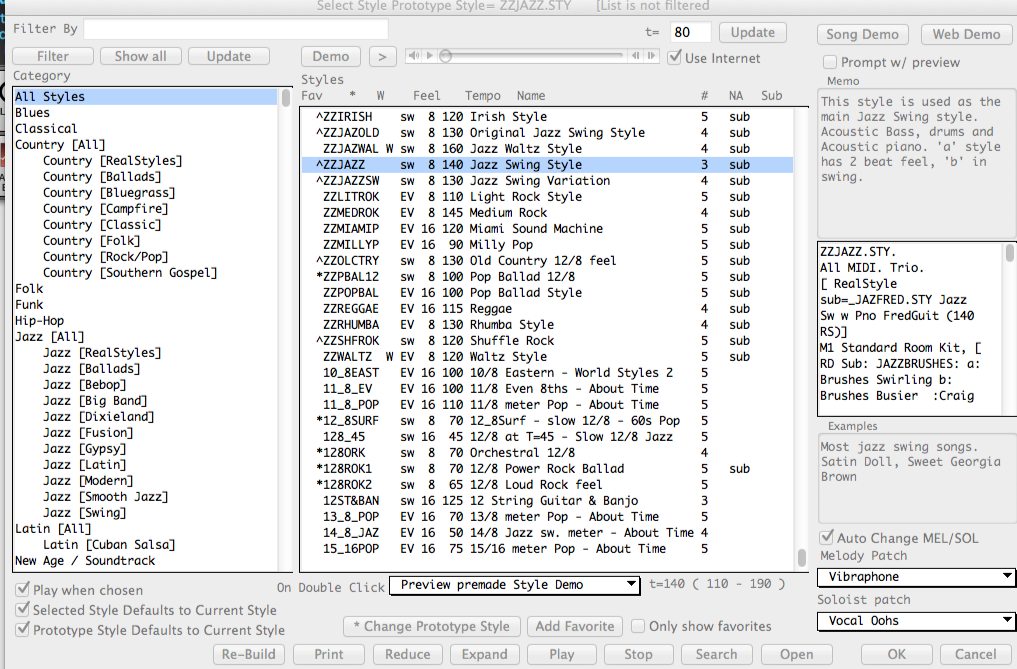 The style that we want is found under what?s called the ?New Utility Styles.?? To find this you have to scroll right down to the bottom of the left hand window of the style picker dialogue box: 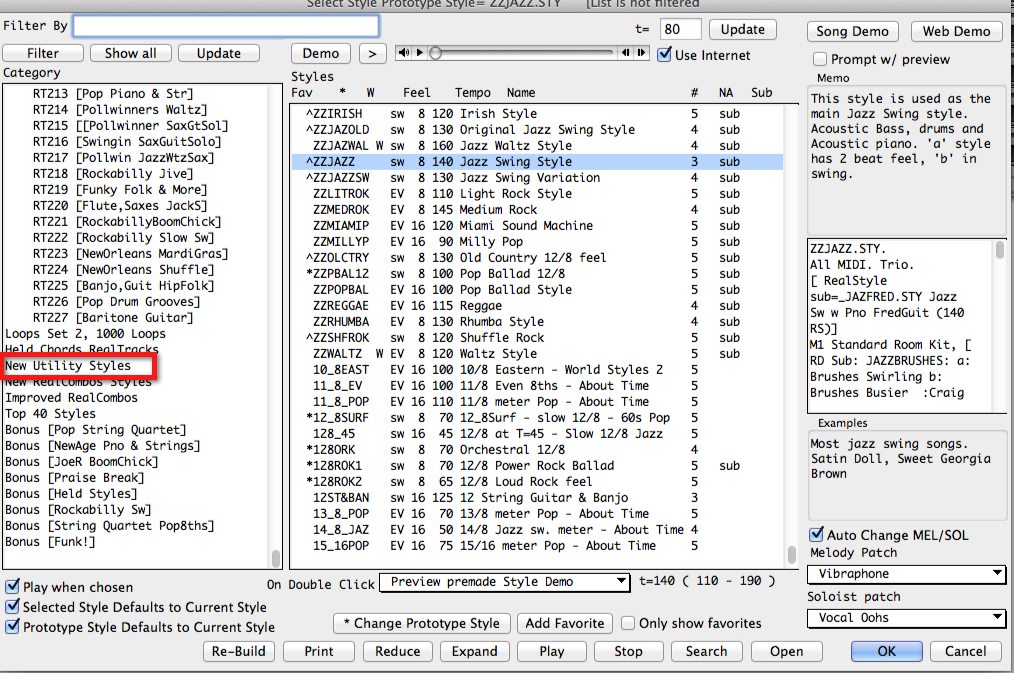 And then if you click on this option – which I highlighted with a rectangular red box – you?ll see five options to pick.? The one that we want is called the ?Piano Hold? style.? So click on that and then click the OK button: 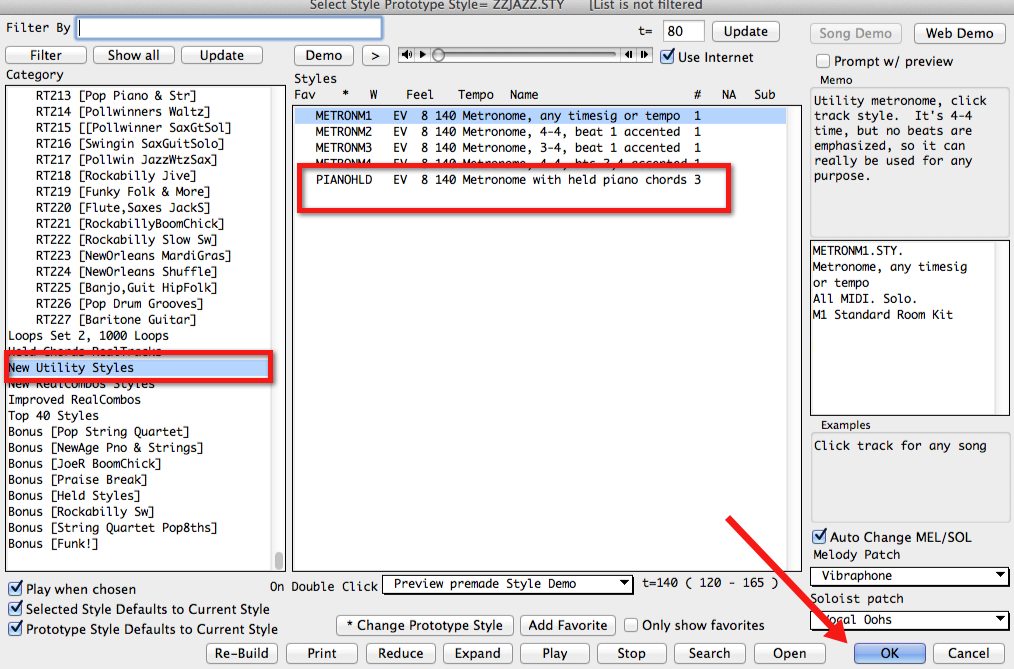 When you?ve done all these steps, you should now see this in your main Band in A Box window:

And you can see that the ?Jazz Swing Style? which Band In A Box loads as the default style into every new track has been replaced by the PianoHold style.? If you hit the generate and play button you?ll then get an 8 bar track played with a chordal metronome.

Couldn?t We Just Use A Normal Band In A Box Style To Give Us Chordal Backing?

Using any band in a box style with piano or guitars in it will give you both rhythm and drums.? But whether I use a chordal metronome or a band in a box band groove usually depends on where I am in the learning process for a particular practice piece.

If I?m still in the early stages – and still focusing on playing as perfectly as possible and putting in perfect repetitions – then I tend to use the chordal metronome as there is less rhythmic and harmonic information on the track (in terms of grooves from drums and harmony instruments).? I tend to use the fuller band tracks (more rhythmic information, plus rhythmic harmonic information) when I?m practicing something for performance, or gettng close to performance tempo.

What About Situations Where You Need? More (Or Even Less) Rhythmic Subdivisions?

Band In A Box only has the quarter note option with its ?metronome? setting.? However, it?s very easy to set up some drum styles that can provide more rhythmic subdivisions.? I?ll show you how to do that in an article next week.

Other Articles To Read

Why Keyboard Players Have Got The Best Ears