Why Jamerson's Playing Is Still Relevant To YOU In 2020

..it's not just relevant, it's crucial for a proper understanding of the bass! 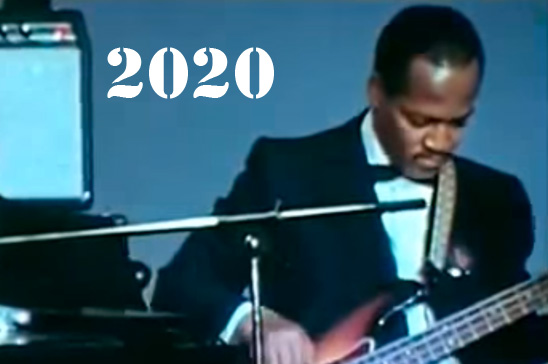 In the first article in this mini series I talked about how you can potentially make exponential improvement in your bass playing by working on your Bass IQ.

And in the second article we talked about how Jamerson developed his genius level Bass IQ by combining concepts from jazz bass with pop and soul rhythms.

In the third article in this mini series I want to talk about why you should give a shit - I mean, Jamerson passed away prematurely the best part of 40 years ago....

So Why Is His Playing Still Relevant To YOU On Your Bass Journey?

Without Jamerson the bass guitar risked being an instrument that from the point of view of what goes into a bass line might have become the electric version of a Tuba just playing roots and fifths.

Jamerson expanded the possibilities of what you could do on the bass. And all those players I listed above (and more) took ideas from Jamerson’s playing and incorporated it into their own playing.

And in their turn they influenced other bass players. Creating a virtuous cycle and a constant stream of bass players of different ability levels influenced directly or indirectly by Jamerson. (Remember in the first article I said that he virtually wrote the book on how to create bass lines?)

This all came to a shuddering halt in the late 80s/early 90s though. Because of...

Whilst some of the early Cubase pioneers were good keyboard players...there were two problems:

There problems then compounded over time - ..as more "cut and paste" musicians (who don't play bass) created and released music using Cubase and without prior knowledge of the rich history of the bass:

The Cubase Revolution is now 30 years old and as well as there being generations of musicians who are not aware of the rich history of the bass because they’re not hearing it on Spotify or YouTube, the other way the vocabulary of the bass used to be spread was via live music. That’s also been decimated by the switch from “band oriented” music to “producer” oriented music.

This is why Jamerson’s playing is relevant to you right now in 2020 on YOUR bass journey. Because learning from Jamerson is like plugging yourself into the source. Learning Jamerson’s core ideas is the equivalent of supercharging your Bass IQ.

The Irony Of Technology

There’s a technological irony at play here….the same technological improvements that brought us the Cubase Revolution means that we’ve got access to a vast catalogue of Jamerson’s recordings with push button availability.

It would be great if more transcriptions of Jamerson’s work were available (part of that book I mentioned writing in the first article of this series may deal with some of this) - that way these transcriptions can be analyzed and the crucial components of Jamerson’s Bass IQ can be identified, codified and taken to your practice space so that you can work on building YOUR Bass IQ.

There’s a nice side effect of this too - as you practice these different ideas your technique will improve as you learn how to execute them and work them up to tempo. So as will as boosting your Bass IQ  (short term big improvements) you’ll also improve your technique (long term, marginal improvements).

So How Can YOU Learn From James Jamerson’s Bass Playing In 2020?

There are three ways I can think of. And we’ll cover those in the next article in this series.  Click the blue 'CONTINUE' button below to find out the three different ways you could use to turbocharge your Bass IQ: