In the previous article we talked about the quickest way of making improvement - and not just a little bit of improvement,but potentially exponential improvement - is by working on something that I called “Bass IQ.”

And there’s a bass player who is widely considered to be one of the best bass players who ever lived and in my opinion wrote the book on BASS IQ.

That’s not a literal book by the way - that’s a project I have been planinng for at least three years and am hoping to get to late in 2020 - but he recorded literally thousands of bass lines in his career that we are fortunate enough to be able to study and learn from.

If you haven’t already guessed, I’m talking about… 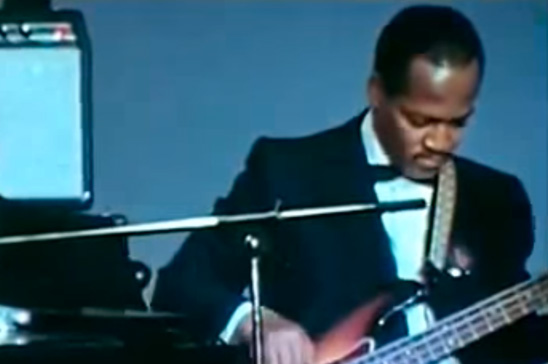 Now don’t take my word for it. Here are some quotes about Jamerson from people with wayyyy more authority than me.

Here’s what Paul McCartney had to say about Jamerson (and you can find this on McCartney’s website: “The biggest influence on my bass playing was James Jamerson who played on many of my favourite Motown releases."

Or how about this from Stevie Wonder: “Jamerson’s bass playing made a certain fabric of my life visual.”:

Or this simple quote from Marvin Gaye: "Jamerson was a genius."

Here’s The Thing Though - Jamerson Didn’t Start Out A Genius….

Jamerson first started recording at Motown in 61. And whilst there are little flashes of interesting ideas appearing in some of his early lines (e.g. My Guy by Mary Wells and the ride out to Marvin Gaye’s Pride And Joy) his “high IQ” level lines don’t really start until 66.

And they are still the exception and not the norm.

Between 67 and 71 Jamerson reeled off a string of masterpiece level bass lines that showcased his genius level Bass IQ: For Once In My Life, What’s Going On, Bernadette, Darling Dear, Home Cookin’, I’m In A Different World, Reflections and the list goes on. And On. And on.

Sidebar: did you know Jamerson played on more #1 Records in the US than the Beatles, Elvis Presley, The Rolling Stones And The Beach Boys combined?

So that leads to the big question…

Where Did Jamerson’s Bass IQ Come From?

There are four facts that I think get overlooked when people talk about Jamerson and his genius bass playing. They are:

If you know your walking bass you can analyze Jamerson’s line and see the genesis of his style as “jazz bass” meets pop and soul rhythms.

Though Jamerson took that to a level that I don’t think anybody ever anticipated.

For example Stanley Clarke said: "the bass on (Bernadette) is serious…That gave me some trouble actually, because I used to play those parts on gigs."

Why Does This Affect YOU?

You might be thinking that’s all well and good - but how does it affect me? In the next article we’ll look at why Jamerson’s Bass IQ is MORE  relevant now nearly 40 years after his premature death than it ever was.  Just hit the blue 'CONTINUE' button to find out more...