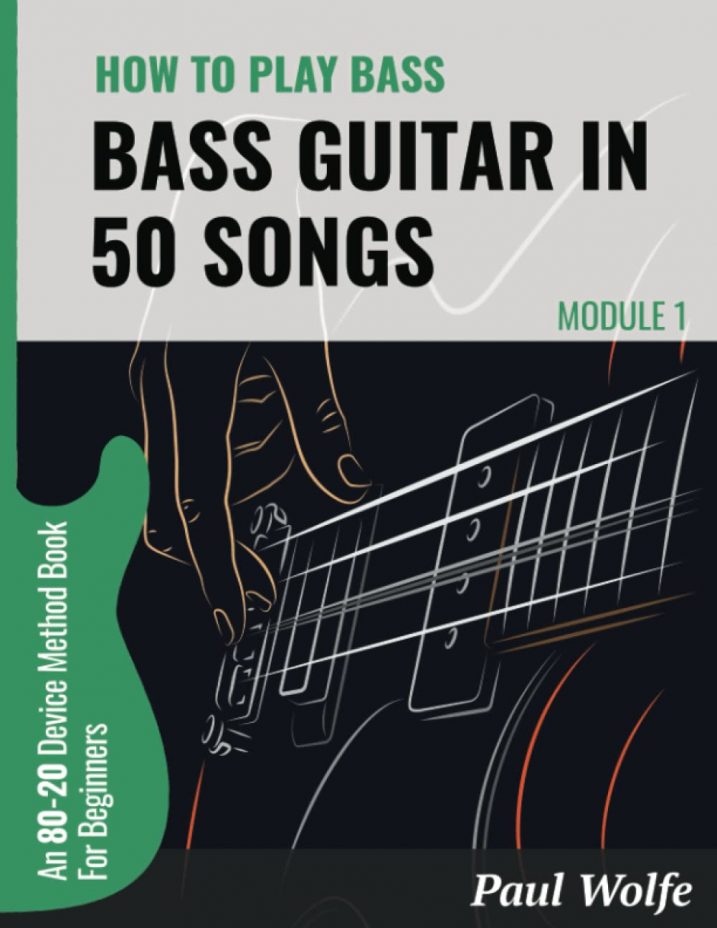 The article below was written in 2008 but it’s remained a popular article on my website.

Since it was first written my concept of learning how to play the bass in 50 songs has been through four iterations. The last iteration is now available from your local Amazon store. Simply search for HOW TO PLAY BASS GUITAR IN 50 SONGS and you’ll find it. More details on the methodology here: THE ONLY SIX THINGS BASS BEGINNERS SHOULD PRACTICE

Here are the 50 songs plus a bit of annotation.

1) YELLOW by Coldplay. Here’s a nice simple line to get started with.

2) WITH OR WITHOUT YOU by U2. One of my favourite U2 songs – simple bass line too, four chords, root notes in a steady 8th note pulse.

3) EVERY BREATH YOU TAKE by The Police. The first of three Sting basslines. This one’s mainly root notes, mainly 8th notes.

4)ROXANNE by The Police. A nice example of the Police’s early mix of reggae and rock (see also ‘So Lonely’).

5) MESSAGE IN A BOTTLE by The Police. Another great Sting line, he’s not a virtuoso but he plays memorable bass lines.

6) ANOTHER ONE BITES THE DUST by Queen. One of the most recognisable basslines in bassdom, played by one of its most underrated players – John Deacon (crap claim to fame: I went to the same school as John Deacon!).

7) ADDICTED TO LOVE by Robert Palmer Interesting 80s rock bassline – learn to rock without the root note on the downbeat. Oh and great video too! (if a bit sexist)

8) DAYTRIPPER by The Beatles The Beatles wrote great tunes, Paul McCartney played great basslines. this riff based tune can be played much heavier than the Beatles original.

9) NEW YEARS DAY by U2 A simple Adam Clayton line, 8th notes all the way.

10) LIGHT MY FIRE by The Doors. Nice 8th note bassline with lots of major and minor triads.

11) MONEY FOR NOTHING by Dire Straits. I’ve got a feeling Sting might have played the bassline on this, it’s a nice 8th note riff kind of song.

13) KEEP ON RUNNING by Spencer Davies Group. A great track featuring Muff Winwood’s iconic driving bassline, the whole tune was reportedly written in less than 10 minutes once he’d come up with the bassline.

14) YOU CAN DRIVE MY CAR by The Beatles More McCartney 8th notes from his transtional mid sixties period.

17) SUNSHINE OF YOUR LOVE by Cream. Learn an iconic bass riff and the blues scale in a single two bar measure! Jack Bruce with Cream, ’nuff said!

19) BET THAT YOU LOOK GOOD ON THE DANCEFLOOR by Arctic Monkeys Great contemporary tune, a good one for the rock jam repertoire.

20) I BELIEVE IN A THING CALLED LOVE by The Darkness Straightforward riff based rock tune.

22) COME AS YOU ARE by Nirvana Some seattle grunge – 8th note style!

23) I SAW HER STANDING THERE by The Beatles Another McCartney line, this one’s a good right hand workout, lots of 8th notes at a brisk tempo (approx 160 BPM).

24) ARE YOU GONNA GO MY WAY by Lenny Kravitz I always enjoy gigging this tune, it’s got a cool basic groove plus some rhythmic embellishments and a guitar solo sections that’s great for drums and bass to play (especially if the drummer’s got a double bass pedal!).

25) CRAZY LITTLE THING CALLED LOVE by Queen. Another John Deacon bassline to another Queen classic – this one introduces the shuffle feel.

26) SWEET HOME CHICAGO by Blues Brother. Not strictly a rock tune but a 12 bar blues featuring Duck Dunn swinging his butt off (the extended film soundtrack version has got some nice upper register work too!).

27) ALL MY LOVING by The Beatles. Another McCartney line, this time a lesson in how to walk through a pop tune. See also 29 below.

28) SPIRIT IN THE SKY by Norm Greenbaum A popular tune, nice shuffle bassline.

30) METAL GURU by T Rex An underrated band whose time was tragically cut short, this tune is a great example of a mid tempo rock shuffle.

31) TOWN CALLED MALICE by The Jam

32) RUNNING FREE by IRON MAIDEN. A heavy shuffle this time, one of the first Maiden classics.

33) MY GENERATION by The Who A classic bassline from The OX (Jon Entwistle). Features include his great bass solo plus playing straight 8ths over the shuffle rhythm.

35) TIME IS RUNNING OUT by Muse The first of three basslines by Chris Wolstenhome (and my favourite Muse track).

37) SUNDAY BLOODY SUNDAY by U2 I’ve got a soft spot for this one, it’s one of the first tunes I gigged regularly back in the day (“Le Pub” in the ski resort of Meribel with a french guitarist/vocalist called Christophe Magnon) – it’s not particularly complex but is another good intro to 16th notes.

40) HARD TO HANDLE by The Black Crowes The original (Otis Redding) was a great track, this version is OK but is a nice feature for a rocking 16th note bass line.

41) YOU OUGHTA KNOW by Alanis Morisette You wait 40 odd songs for a Flea bass line to come along and then like buses here come’s another. Great song, great bass line, loads of 16th notes, ghost notes and tasty fills to feast on.

43) CROSSROADS by Cream. My favourite Jack Bruce track with Cream (his favourite is Politician which shows you how much I know!) A masterclass in the blues, rock style.

44) AEROPLANE by The Red Hot Chilli Peppers And here’s another barrage from Flea’s furious fingers!

45) SMOOTH CRIMINAL by Alien Ant Farm I had to gig this a few times about five years ago – great version of a classic MJ song, great bassline, great exercise in 16th notes.

46) ANTHEM by Rush Geddy Lee was probably more responsible than anyone for me picking up a bass guitar in the first place. By Rush standards this is a fairly conventional tune, but you gotta love what Geddy plays under the guitar solo. Class with a capital C!

47) HIT ME WITH YOUR RHYTHM STICK by Ian Drury and the Blockheads This is an unusual song choice – it’s not a rock tune in the classic sense, but it’s got a restless punky energy to it – and a killer bassline!

48) NUMBER OF THE BEAST by Iron Maiden Another one from Steve Harris – another bass player highly underrated IMO. This song’s got everything you’d expect in a Maiden song – high register intro work, tons of 16th note moshes and gallops, some tricky unison lines and even some odd time signature! Great workout.

49) HYSTERIA by Muse One of Chris Wolstenholme’s finest, another great workout.

50) STOCKHOLM SYNDROME by Muse Same as HYSTERIA. When you’ve finished the course and learnt all of these tunes you’ll have a thorough grounding in the rock idiom and be on the cusp of progressing from a beginner to an intermediate level bass player!