…Just The Days That You Eat.”? Shin’ichi Suzuki 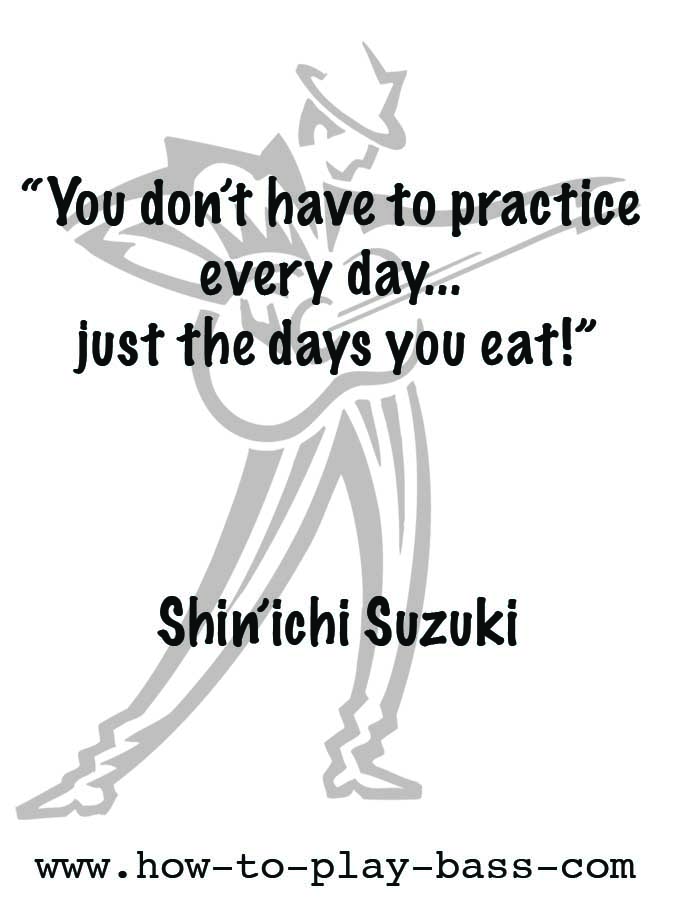 Shin’ichi Suzuki is the guy who developed the Suzuki Method of learning for (originally) violinists and pianists. Now there are some great things about the Suzuki Method (e.g. their advanced use of mental representations for beginner students) and some things that aren’t so great (read virtuoso Mark O’Conner’s blog for his thoughts on playing rigidity inherent in Suzuki’s teaching).? Those are topics for another day.

Let’s talk about the quote itself.

The first thing to note is that the quote speaks to the importance of regular practice.? According to Suzuki that should be every day.? There are many benefits to practicing every day.

But the big question is: should you practice every day?

I believe that the answer is different for every one of us.? It depends on a number of factors such as: the exact nature of our bass playing goals; the time frame in which we want to achieve those bass playing goals; how busy our existing lives are…and so on.

Ultimately only YOU can make the call on exactly how much practice you need to put in on a daily, weekly and monthly basis because only YOU have all the pertinent facts at hand to formulate this decision.

However you tailor your bass practice to fit into your life regular practice is a vital component.

What Isn’t As Effective

Let’s say you work through your goals, how long it’s going to take to acheive them and the current available time you have to practice.? And you decide that you can put in five hours of practice a week.

DON’T make the mistake of practicing five hours on one day of the weekend and nothing else.? Having regular practice sessions throughout the week is far more effective.? Here’s why:

Suzuki was on the right track – but I don’t believe you have to practice every day.? Even if you are practicing hard (several hours a day) on a regular basis it keeps you ‘fresh’ to have a rest day built into your week.