When I first started to recognize the reoccurring patterns that occurred in bass lines across all musical genres (except for death metal!) I was telling a fellow musician (a keyboard player) about what I’d discovered.

He said something like: “well how are you going to actually use this library of patterns and ideas that you’ve discovered?”

Up to that point I was still in the discovery phase and still looking for more devices and also clarifying in my head how devices worked together to create bass lines (and hadn’t yet come up with the concept of modifying devices and connecting devices that you’ll meet within the next week or so!).

But I realised that if the majority of bass lines in multiple genres where formed out of essentially the same material, that a way to improve your bass playing was to isolate these devices and practice them thoroughly (along with associated modifying devices) so that when you were learning real world bass lines you would already be intimately familiar with how most of the devices sound and how they ‘lay out’ on the fretboard and under your fingers.

So I created some exercises – this started in 2013 – that allowed me to do this. I called these exercises “origin exercises.”

To me they’ve always been “origin exercises.” So for now we’ll stick with that.

But there are other ways you can practice the “origin exercises” that I’ve mentioned. And in this lesson I just wanted to introduce the other way of doing this.

Practicing with cycle tracks is a really efficient way to ensure that you’re covering all 12 keys equally. Most of you are probably aware of the cycle of fourths and fifths – that’s the most obvious cycle in music that there is. If you start at C, you’ll progress through the remaining 11 keys in this order:

To illustrate how this might work, here’s the device that we used in the examples in the previous lesson – the 8-b7-6-5 device – and in the musical example below I’m going to play this device through all 12 key areas using the cycle of 5ths and starting with a C7 chord: 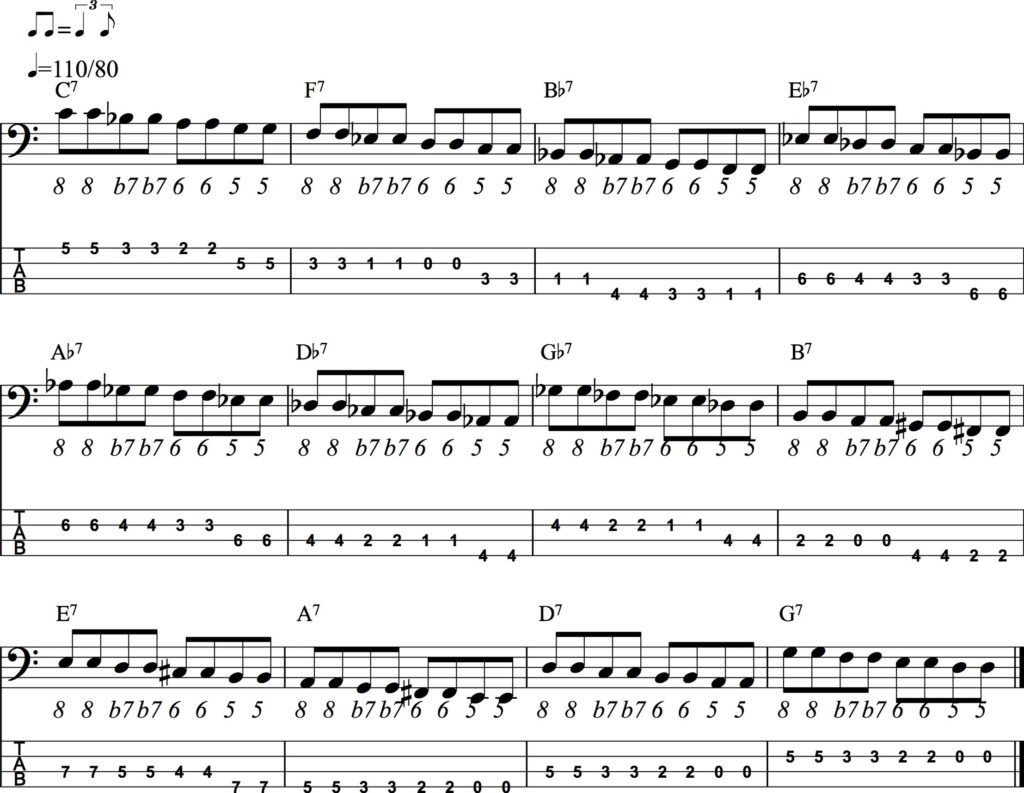 Now here’s how the cycle tracks can display efficiency. The video on the tutorial page is just over 30 seconds long. So you can practice this device in all 12 keys in just 30 seconds….if you wanted to use the blues progression (coincidentally also 12 bars long) you have to play through at least 6 keys to make sure you are hitting every key centre.

So cycle tracks can be much more efficient than common chord progressions.

For your information here are other cycle tracks that can be useful practicing origin exercises – we won’t use all of them in the Challenge but we’ll definitely use some of them and I’ll render MP3 practice tracks at different tempos for you to use:

In this lesson I’ve talked about a kind of exercise that you can use to isolate and practice the common devices found in bass lines from rock to pop to blues to country to reggae and more (but not death metal).

I call these exercises “origin exercises.”

To use a sporting metaphor practicing them is the equivalent of a tennis player practicing ground strokes, or a golfer practicing specific drives and putts and so on.

And once we’re comfortable at 100 BPM then we can move forward and play at 120 BPM:

Now you might be wondering where this is leading...over the last 2 years as I write this (end Sept 2020) I've been putting all the devices, modifying devices, connecting devices that I've found from analyzing literally thousands of bass lines into a course called The 80-20 Program.

In the next article I'll give you an idea of how you can create your own "80-20 Program." Or if that's too much work...you can check out mine!  Hit the blue CONTINUE button to find out more (NOT YET ENABLED).