The Multiple Benefits Of Practicing Devices...

...and why there's a picture of 1 Guy playing Chess against multiple opponents at the same time! 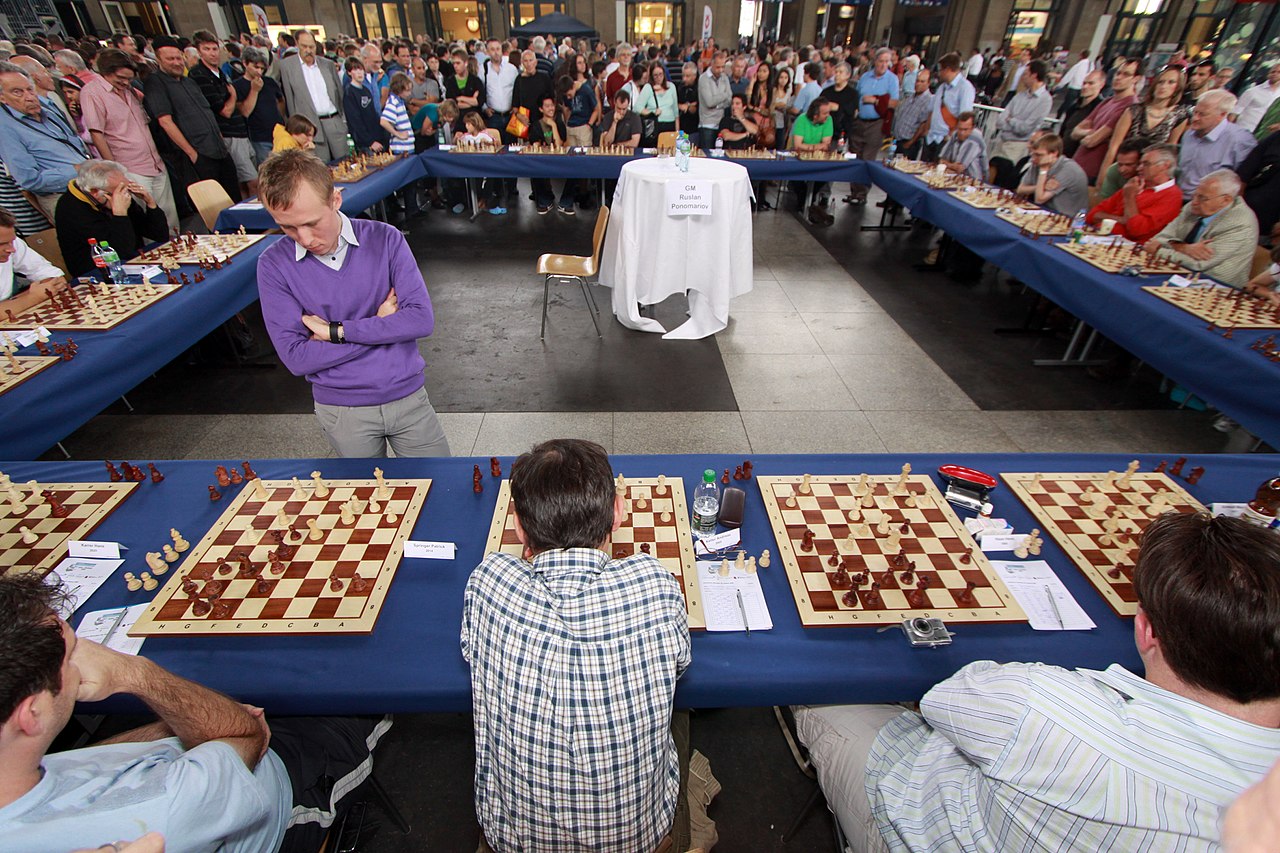 In the previous article in this series we talked about the bass player's role in the band and I talked about the secret DNA of good bass lines - which are collections of specific notes that I call devices.

Now when I was younger I was a chess nerd - I played for my county and entered tournements (where I routinely beat adults - I was 12 or 13).

I'll never forget the day that I played a Chess Master though.  It cost me the princely sum of £1 (close to £10 in current value).  And it wasn't just me who played this guy - there were around 25 of us.

Our boards were set up in the local village hall....tables were arranged in a big U.  And the Chess Guy went to the first board, glanced at the pieces, made a move and then repeated this with the next board.

And then he went back to Board 1 and the process started again.

Whilst he was looking at other boards you could take your time to plan YOUR next move.

So the Chess Guy played 25 of us at the same time.

I don't remember the exact final tallies - I remember that I was convincingly beaten - if you've ever arm wrestled someone much stronger than you then this was the mental equivalent of that....slowly being ground down with no way out - but nobody beat him.  I think two guys managed to eke out fighting stalemates.

I thought this guy must have had a brain like Einstein.

Turns out that's not the case though.  It's a product of training. Without going deeply into this it turns out that Chess Masters don't see chess boards in terms of pieces, they see them in terms of groups of moves.  Because the history of high level Chess games is so well documented, the players who go on to be masters study literally thousands of games to build up this internal library of possibilities.

And it's the same for bass!

In the fifth and final article in this series I'll pick a device from the library of devices that I've identified and codified and post video clips for a handful of bass lines from different genres using that device so you can see for yourself.

For the moment I want to talk about the benefits of isolating devices and practicing them like that.

#1. Devices Are The Building Blocks Of Good Bass Lines

I've spent the last 10 years transcribing and analyzing bass lines codifying these devices.  You'll find them everywhere - rock, pop, blues, reggae, soul, funk, and everything in between.  So practicing the elements that you're going to find in the bass lines of the players YOU admire prepares you to be able to play those lines.  Or create your own lines in those styles.

If you've ever had the privilige to watch an elite sportsman or woman train you should notice that they don't practice one thing a couple of times and then move on to the next thing (unless they are warming up).  They'll isolate something that needs to be worked on and practice it over and over focusing on tiny details that you or I can't even perceive.

You can do the same thing with devices.

And by isolating a device you can practice it to a degree that builds your technical fluency and (over time) will improve your bass playing.

The reason keyboard players and guitar players generally have better ears than bass players is because whenever they are practicing they are playing chordally - and a subliminal benefit is they get used to the sound of different types of chords and progressions without specifically practicing it.

You can build that into your device practice by practicing with backing tracks that have chordal material (guitars and keyboards) as well as rhythmic material.  With the software that's now available - and there are multiple ways of doing this - it's very easy to generate practice tracks that are like practicing with real musicians.

One of the favourite emails I get from students goes something like this: I heard a song on the radio today and I could hear the bass player was using the devices from the lessons this week!

Not only does understanding devices change the way you view bass lines (and how you put devices together to create bass lines is something we'll talk about in the next article) but practicing with devices also changes the way you hear bass lines!

Once you've built technical fluency with devices you can also practice with different real world rhythms.  This is the equivalent of a golfer dropping twenty balls into a bunker and hitting them...and then doing it again.

Last season I was assistant coach of my eldest son's U18 Basketball team and the head coach had a mantra at training sessions: practice how you are going to play.

One of the great things about practicing devices is that they are the building blocks of bass lines - whether you are playing a famous bass player's lines or creating your own - and once you achieve a degree of technical fluency then you can adjust your practice so that it's very realistic.  One of the elements you can use for that is real world rhythms.

In the last few years working with students I've come to the opinion that learning about devices and practicing them and building up your own library of devices is the quickest way to make substantial progress on the bass.  (Unless you want to be a Victor Wooten/Marcus Miller/Billy Sheehan solo type of bass player).

This process I refer to as building your Bass IQ.

Click the blue CONTINUE button for the next article in the series when we'll talk about how you can take devices and start creating your own bass lines with them.

#1 They Laughed When I Pulled Out My Bass - But When I Got Up To Play! https://how-to-play-bass.com/rb101-they-laughed

#2 The Core Functions Of A Good Bass Line - https://how-to-play-bass.com/rb101-core-functions