They Laughed When I Pulled Out My Bass - But When I Got Up To Play! 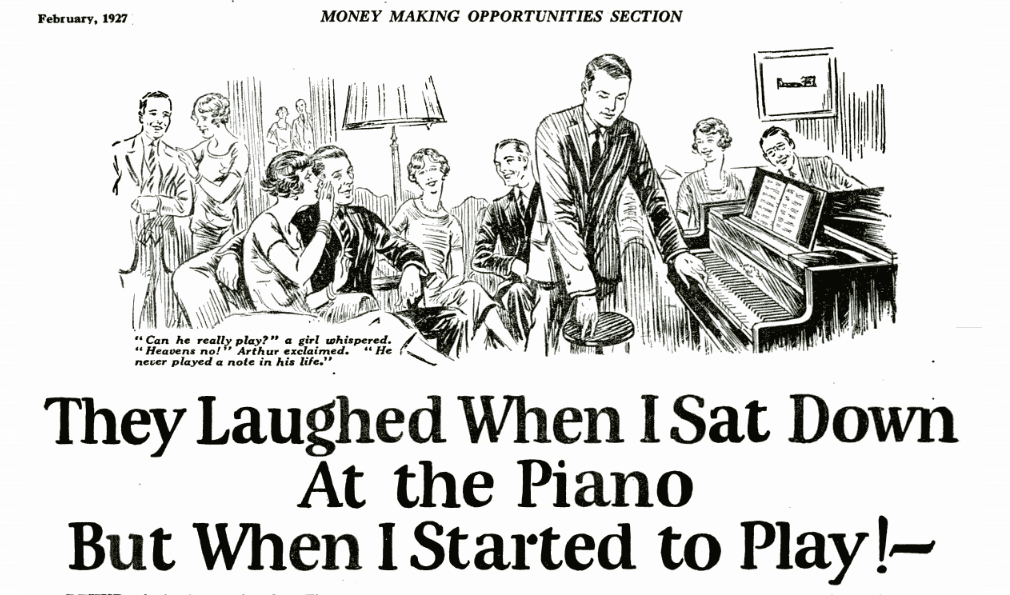 If you know anything about the history of advertizing (which you probably don’t!) then you’ll know that this is a paraphrase of a famous advertizing slogan that was used to sell distance learning of the piano (and other instruments) the best part of a 100 years ago.

And though some of the psychology behind this ad is no longer relevant a 100 years later, it’s still just as true that we get a kick out of the idea of playing well in front of an audience.

That’s to do with the chemicals that the brain produces in response to various situations.  The combination of the brain producing seratonin, dopamine and oxytocin can be an incredible rush.

I’ve often thought that one of the reasons that so many musicians are addicted to alcohol or drugs or sex - or combinations of those three - is that it’s an attempt to recapture the kind of natural high that you get from playing in front of a live audience.

I once wrote: playing good music with a good band in front of a good audience is just about the most fun you can have that’s legal.  Substitute a great audience  for a good audience and the resulting increase in chemicals produced by the brain is dangerously potent.

You might be thinking: that’s kind of interesting, but what’s that got to do with learning the bass?

Here’s the thing: very few people pick up the bass to play the bass as a solo instrument.

The bass is not an instrument like the piano or the guitar that you can play solo - in many ways the bass is the ultimate team instrument.

I like the quote from Springsteen bass player Gary Tallent who said something along the lines of: I like people to notice what I do only when I stop playing.

You might be thinking: what about Victor Wooten?  Or Marcus Miller? Or Billy Sheehan?  And it’s true those guys are capable of doing incredible things with just the bass.

But also notice that there’s only a handful of guys in the world doing this, that if they have solo concerts they are attended by a relatively small number of people AND that most of their gigs are done as part of either someone else’s band or as part of a band that they have put together.

For every Victor Wooten or Marcus Miller or Billy Sheehan there’s 10,000 guys and girls (probably more) just like you or me.

Bass players who stand outside the glare of the spotlight night after night playing the classics of rock and blues and pop and soul.

Sometimes we have to play bass lines that are pretty faithful to the original song. But as I’ve grown older - and got more experience under my belt - I’ve come to realize that in a lot of songs there is a lot more freedom in terms of what we can play.

We can be more creative in the lines we create whilst at the same time doing our job as a bass player (more on that in the next email) and still delivering both what the song needs and what the audience needs.

Click the blue CONTINUE button for the next article in the series when we'll talk about the core functions of a good bass line.