How To Play Bass - More On The "Words" Approach

examples of a common 'word' in the bass vocabulary 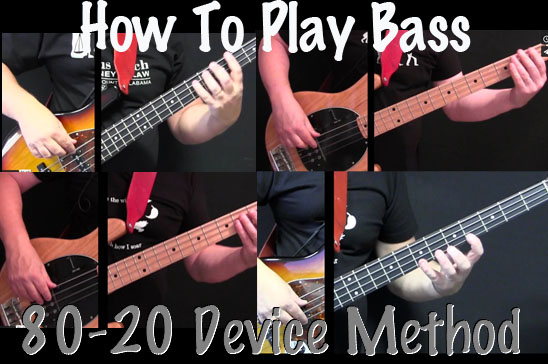 So in the previous two articles in this series I’ve talked about the concept of playing bass by playing “words” and not “letters.”

I have a name that I use for these ‘words’ that we can put together to create bass lines: I call them devices.

I didn’t coin that term as such. I learned it reading a book called ELEMENTS OF THE JAZZ LANGUAGE by Jerry Coker. In that book, Coker goes through a story about his recovery of a back operation where he had to be horizontal for several weeks. Coker is a sax player….pretty difficult to play the sax on your back.

By the time he’d finished he’d collected around 17 or 18 devices (from memory…the book is in my storage unit) and those devices formed around 90% of what he found in jazz solos. (Sidebar: if you want to learn to improvise in jazz, this is a good book to start with!)

The language of bass is slightly different – jazz solos are forms of melody and the bass line performs a very different function. I’ve identified a core number of devices – it’s around 40 – but there are variations, plus there are secondary devices that you can use to vary the sound further.

Today I want to talk a little bit about one of these devices that I’m pretty sure you probably know.

That device is the major triad.

Again, I’m sure you know, but theory wise the major triad is constructed of the root, the major third, and the fifth. Though the root can be played as an octave and you go down to the third or the fifth.

There are plenty of ways you can play the major triad – and it’s a sound I’m pretty sure you’re familiar with. For example here’s the verse of Midnight Hour by Wilson Pickett with a line that uses the major triad. Have a listen:

Here’s another example – this time it’s in the style of the chorus of Light My Fire by The Doors:

Or you’ll find that the bass line to Dance The Night Away by The Mavericks is mostly major triads too, here’s a section in the style of the verse:

Now Paul McCartney was another big fan of the major triad – and you’ll find it in his Beatles work pretty much from the early days right through to the late 60s work.

Here’s the chorus from Baby You’re A Rich Man – see if you can hear the Major Triad in this bass line, it’s not present in all of it, but it makes up a good proportion of it:

So The Major Triad Is A Device…What Do We Do With That Information?

In a minute I’m going to show you that you can play some lines pretty much just using the major triad.

But here’s the benefits of identifying that the major triad is a foundational device in the bass language and practicing it thoroughly:

Let me put together a couple of examples to show you how you can create bass lines using pretty much just the major triad.

This first one is a straight 8th note blues rock kind of line – it’s very similar to the line I used to play in the first cover band I was in for the Bryan Ferry version of Let’s Stick Together (though note that to really make it sound 100% authentic you need to add a modifying device to the front of each bar – that’s outside the scope of this lesson though): 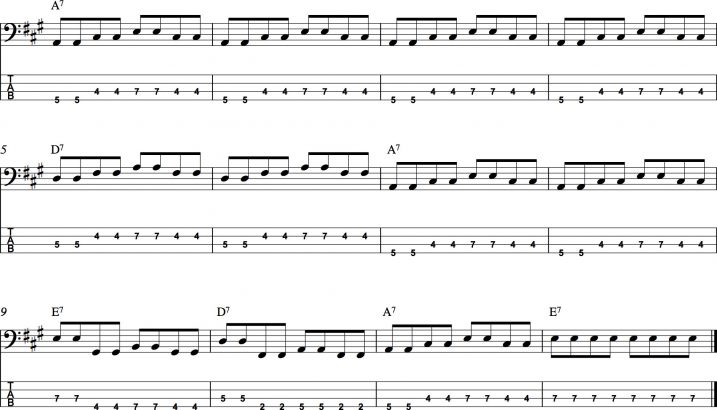 And here’s a second example….this is a reggae style example and the bass line is very much built around the major triad on the front end of the bar with some pick up notes on the back end of the bar. If you listen to STIR IT UP by Bob Marley or MOTHER AND CHILD REUNION by Paul Simon you’ll hear early reggae bass lines built around major triads:

Now these examples are fairly simple, but hopefully you should get an idea of how bass lines can be built up around the device I’ve introduced today – which is the major triad.

Once you know a reasonable number of these devices you can of course create lines with more variety….and in fact that’s what I’m going to do in the next lesson in this series.

Click the blue CONTINUE button to check those examples out:

If you want to check out the previous articles in this series then click on the links below to check them out:

#2 How To Play Bass - By Playing Words Not Letters - https://how-to-play-bass.com/words-not-letters