The 3 Reasons Every Bassist Should Learn To "Walk" 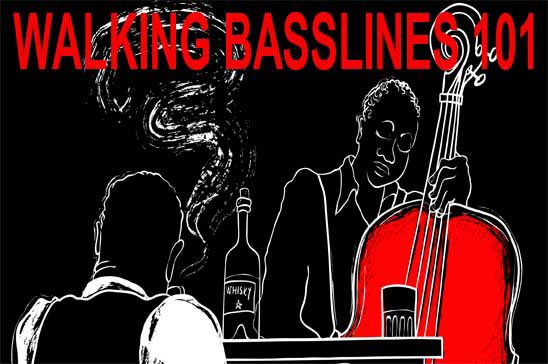 In the last previous articles I've been talking about Walking Bass.  And whatever style of bass you play, there are three reasons why I think every bass player should learn how to walk.1.  A Great Way To Start Learning  How To Create BasslinesBy their very nature walking basslines are improvisatory - learning how to create and play these lines is a great way to get started working on creating your own basslines.2. Fretboard FacilityWalking Bass Lines tend to go all over the neck - so by playing them you'll develop facility all over the neck.  Additionally because the kind of jazz songs that you'll play have many more chord changes than typical rock and pop type tunes you'll develop a much wider knowledge of how harmony lays out on the fingerboard. A side benefit of this is that because walking bass lines are much more fluid - both in terms of position that you're playing in AND also in terms of notes that aren't root notes being played on the downbeat - than traditional bass lines then this really helps get bass players who started by learning lots of scales (most bass players) out of the 'thinking' of playing in scale positions.3.  Understanding The Language Of Electric BassThis might be counter intuitive.  But let me add two words:James Jamerson.James is often cited as the guy who did the most to develop a language for the electric bass - so what's the connection?  Having studied both Jamerson's bass lines in detail AND walking bass lines in detail, it's clear to see that Jamerson's conception of bass lines was developed playing walking lines.Before he layered on 16th note rhythms and his lines became more complex you can clearly hear this walking bass influence.  Indeed there are three examples I can immediately think of where it's not even disguised:1.  Heatwave by Martha And The Vandellas.  Apart from the unison riff at the end of sections it's almost entirely a simple walking bass line.2.  Pride and Joy by Marvin Gaye. For the majority of this song James is playing a simple blues based 8th note bass line.  But if you go have a listen on Youtube and check out the 'ride out' section you'll hear him move to what is a walking style line.  In fact on the very first bar of that section he uses a sophisticated pattern to walk to the next root note - and I've found that pattern in the basslines of guys like Ray Brown, George Duvivier and others.  Very out there for a 'pop' song recorded in 64.3. My Guy by Mary Wells. If you've read Standing In The Shadows Of Motown you'll probably remember the story of how The Funk Brothers came up with the intro to My Guy by combining stuff they'd done on a jazz gig the night before.  Now James's bass line has got little walking bass flourishes and ideas throughout - I believe it was recorded on his upright too - and the bass in the ride out section is pure walking bass.So three reasons why you should learn walking bass.

In the next article I want to circle back to the intersection of deliberate practice and walking basslines.   Click the blue CONTINUE button below to find out more.

3.  What Ed Friedland's "Building Walking Basslines" Book Has Got: https://how-to-play-bass.com/wb101-what-bwb-has-got