Rather than try to explain a device in an abstract way, I’m going to illustrate it with a musical example. So the following example – is the shuffle  blues in A using a device called the 8-b7-6-5: 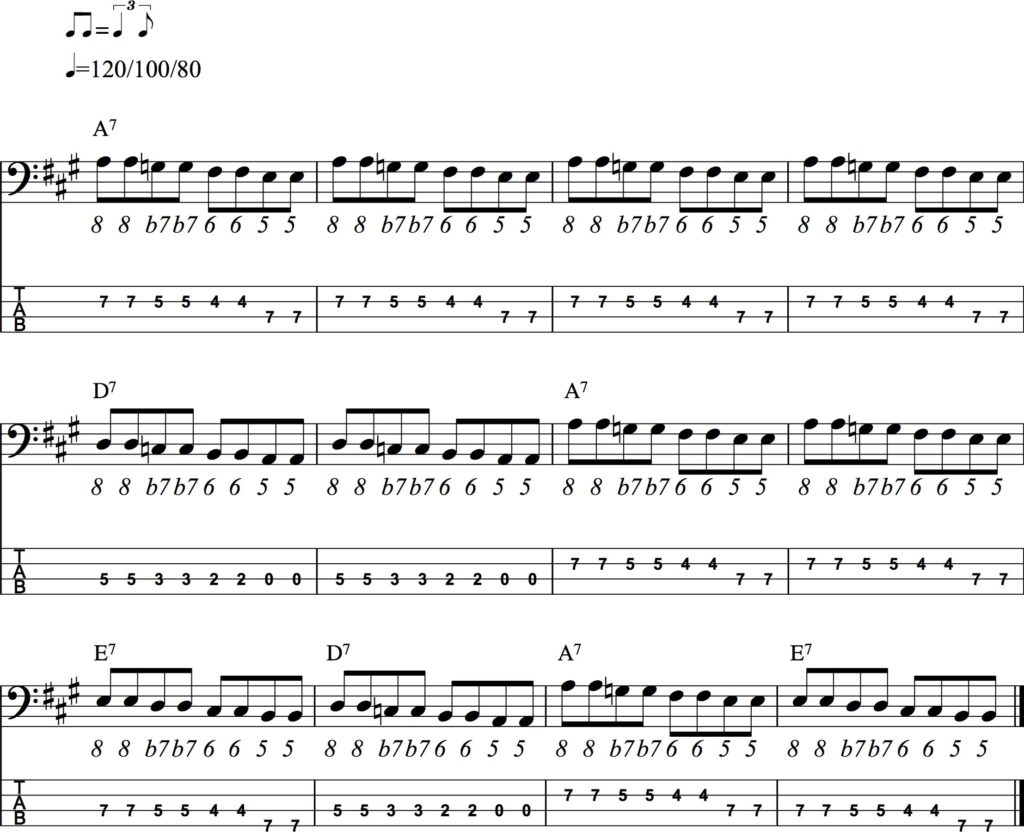 For those of you who’ve not come across the annotation I use to analyse notes before (the numbers underneath each note) here’s a quick explanation of some of the annotation:

Why Is Identifying These ‘Devices’ So Important?

Identifying the commonly used devices found in 90% plus of bass lines allows us to:

(ii) isolate the device and practice it in multiple chord settings and key centres so that we become fluent with that device and can use it in our playing. And that playing is either learning someone else’s lines or creating our own lines.

(iii) devices that have been identified and isolated and practiced then become part of our playing vocabulary going forward.

When I first explained this concept to a couple of bass playing friends of mine, they kind of understood it. But one of them said:

If We Are Learning ‘Patterns’ Won’t Our Playing Sound ‘Boring And Predictable?’

The answer to this is an emphatic No.

Firstly, the devices I’ve identified can be combined in different combinations in literally thousands of different possibilities. Tommy Shannon is a great example of this – he has a relatively small number of devices that he uses over and over – and yet his work with Stevie Ray sounds consistent but not repetitive over the four or so albums he recorded with Stevie Ray.

But thirdly there are secondary type devices that you can use that varies things up even more. Either ‘modifying devices’ or ‘connecting devices.’ We’ll talk about these in more detail later in the challenge.

SIDEBAR: The following can't be stressed enough: there are a relatively small number of devices that ALL bass players playing songs (i.e. not soloing) use. The Device we've talked about in this lesson has been used by James Jamerson, Duck Dunn, Paul McCartney, Bruce Thomas, John Paul Jones, Tommy Shannon, Carl Radle, Berry Oakley and thousands of others in rock, pop, soul, R&B and blues!

SIDEBAR 2: up until now NOBODY teaches this relatively small number of commonly used devices that make up more than 95% of the "language of bass" as it applies to playing bass lines to songs.

An 80-20 device is a commonly used bass pattern where the pattern is expressed by the harmonic function of the note. So the main device we used to illustrate the concept of device in this unit was the 8-b7-6-5 pattern.

It may sound like practicing bass line devices leads to predictability – the truth is that once you have mastered a few devices and more importantly how to use them and combine them, then your playing will only be as predictable as you want it to be. And once you understand how to put devices together in a way that leads the listener's ear through the chord changes you’ll be able to create authentic bass lines that are anything but predictable.

In the next article we're going to look at how to practice an 80-20 Bass Device from 1st principles. Click the blue CONTINUE button below to check that out.